The Third Mind Books May/June special celebrates Beat-&-Beyond giants WILLIAM S. BURROUGHS and MICHAEL McCLURE with 30 hand-selected rarities spanning the storied careers of both relentless innovators. 15 items from Burroughs & 15 Items from McClure—all 10-15% off for the months of May/June only!

To celebrate our namesake, Master Magician of American Letters, William S. Burroughs, we have chosen to highlight his placement in literary journals. Burroughs has been published in innumerable forms, and in widely-varying types of publications. These range from his earliest appearance in pulp paperbacks; his revered placement in mimeo rags; polished trade paper and hardcover formats; and hundreds of scattered appearances in common to obscure literary journals. For the May/June special, we’ve decided to highlight Burroughs in the last of these—the literary journal—and have chosen to feature some of our favorite WSB journal appearances (including his 1965 Paris Review Interview; an issue in which WSB appears alongside Jazz legend Dizzy Gillespie, and the gorgeous Ambit No. 20).

We’ve also chosen to feature Michael McClure, a participating presence in the West Coast Beat Scene from the dawn of the first San Francisco Renaissance. McClure is primary, and his multifaceted work & career have encompassed not only prophetic ecological exhortations, but his own distinguished round of censorship battles—inarguably of similar type and scope to the battles which famously besieged his contemporaries Burroughs and Allen Ginsberg. Well-charted historically by Beat scholars, McClure’s 1967 work “The Beard” ambitiously first sought to include Jim Morrison, famously the lead singer of Psychedelic Rock group The Doors. Its closing scene was to include live cunnilingus to be performed by Morrison on the play’s female lead. While Morrison’s allegiance to the Doors’ rigorous touring and recording schedule prevented his involvement, McClure’s play went on to garner prestigious accolades in the avant-garde community and beyond. Be sure to view our Beard broadside-announcement poster in the Featured Items section of our site (link below); the area which houses our bimonthly specials.

Be sure to view the cornerstone of this special—a package including signed books, a signed broadside, and a selection of unpublished letters (discussing personal and scholarly minutiae) between Beat scholar Gregory Stephenson and Michael McClure—when perusing the May/June feature! 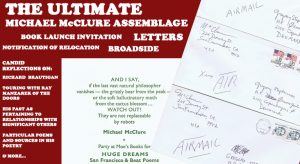